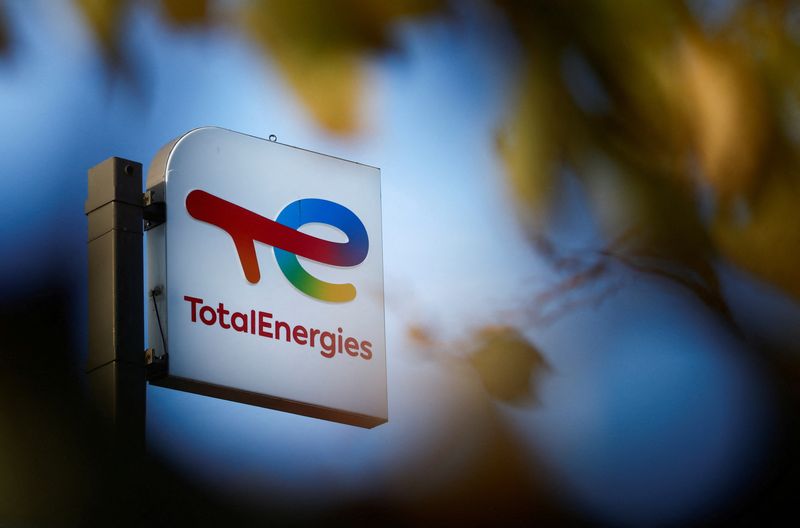 © Reuters. FILE PHOTO: A sign with the logo of French oil and gas company TotalEnergies is pictured at a petrol station in Bouguenais near Nantes, France, November 14, 2022. REUTERS/Stephane Mahe   ENRY +18.52% Add to/Remove from a Portfolio Add to Watchlist Add Position

DUBAI/LONDON (Reuters) – Qatar is in talks to acquire a stake from French company TotalEnergies (LON:TTEF)’ $27 billion cluster of energy projects in Iraq, three sources told Reuters, as Baghdad hopes to stem efforts by Western energy companies to exit the country.

A major investment by a Gulf state would mark an important win for Iraqi Prime Minister Mohammed al-Sudani, who took office last October following more than a year of political turmoil, and would also be considered a step towards countering Iranian influence.

QatarEnergy is looking to acquire a stake of around 30% in the project, one source said. Energy companies rarely own 100% of projects and prefer partnerships to reduce risk.

After a flurry of deals after the U.S. invasion over a decade ago, international oil companies have been trying to leave Iraq due to poor returns from revenue sharing agreements.

When TotalEnergies and Baghdad in 2021 signed an agreement to build four giant solar, gas, power and water projects in southern Iraq over 25 years, hopes for an exodus reversal were high. Exxon Mobil (NYSE:XOM), Shell (LON:RDSa) and BP (LON:BP) have all sought to scale back their operations in Iraq in recent years.

But the project, aimed at boosting the country’s economy and reducing its dependency on Iranian gas, is yet to take off.

The TotalEnergies deal with Iraq, which will require an initial investment of $10 billion, followed a visit from French President Emmanuel Macron in September 2021.

The terms of the deal, which have not been made public or previously reported, had raised concerns among Iraqi politicians and were unprecedented for Iraq, sources close to the deal told Reuters in February 2022.

The deal includes the construction of a natural gas gathering network to supply local power stations through the expansion of the Ratawi field, building a large-scale seawater treatment facility to boost output from other fields using water injection and a large solar power plant in the Basra region.

But there has been little progress since then. Sources told Reuters last year that disputes over terms had risked scrapping the project.

QatarEnergy and the Qatari government communications office did not immediately respond to a request for comment about the talks.

TotalEnergies did not confirm the deal when contacted by Reuters.

A senior Iraqi oil ministry official said he was not aware of QatarEnergy plans to acquire a stake in the TotalEnergies’ project.

Iraq’s Sudani is travelling to Paris on Thursday and will meet Macron, a spokesperson for the Elysee said.

One of the sources told Reuters Sudani would also meet TotalEnergies Chief Executive Officer Patrick Pouyanne in a bid to end the deadlock.

QatarEnergy and TotalEnergies have been talking about a stake in the project, and even though no final agreement has been reached yet, there was a lot of confidence it would materialise, two of the sources said.

Arab nations including Saudi Arabia have been trying to counter Tehran’s influence in Iraq.

Iraq and France in December jointly organised a conference in Jordan to show support for Baghdad, which has faced crises ranging from Islamic State militants, climate change, corruption and instability since the 2003 U.S.-led invasion.

The French and Qatari energy companies have close partnerships in Qatar’s giant liquefied natural gas (LNG) production as well as major energy projects around the world including in Guyana, Namibia and South Africa.

Pouyanne told investors following the deal announcement that Iraq was a core part of TotalEnergies’ focus in the Middle East and the deal was a “win-win” for Baghdad and his company which will be paid via oil sales from the Ratawi field, one of four projects in the agreement.

He also said TotalEnergies was looking for partners in the projects, in which it wanted to keep a 40% to 50% share.