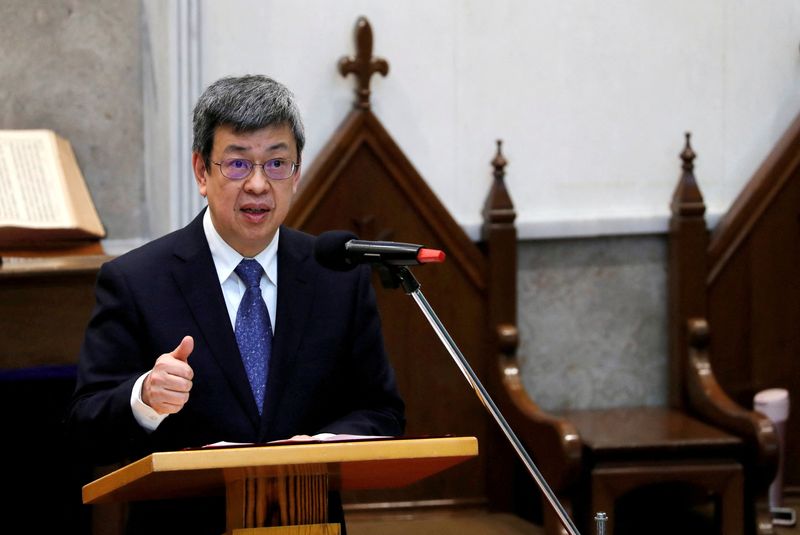 © Reuters. FILE PHOTO: Taiwanese Vice President Chen Chien-jen attends an event to campaign for Taiwan to be recognised as a participant in the United Nations and World Health Organization, in Taipei, Taiwan March 10, 2018. REUTERS/Tyrone Siu/File Photo

Premier Su Tseng-chang submitted his resignation last week along with that of his cabinet ahead of the widely expected government reorganisation.

Su’s move followed the DPP’s trouncing at local polls in November, and comes as Taiwan gears up for presidential and parliamentary elections in early 2024.

President Tsai Ing-wen is expected to hold a news conference on Friday morning to formally make the announcement, her office said in a short statement, but without giving details of which other positions would get new ministers.

Chen, 71, is a devout Catholic who served as vice president during Tsai’s first term in office, from 2016-2020, and Taiwanese media had named him as the person most likely to be the new premier.

He will have to oversee several tricky issues, including navigating the export-oriented island’s slowing economy and plans to extend military conscription to one year in the face of a rising military threat from China, though the DPP has a large majority in parliament meaning its proposals do get passed.

Chen only joined the DPP last year but took on a high profile position campaigning for the party ahead of November’s local elections.

He also attended former Pope Benedict’s funeral at the Vatican this month as Tsai’s envoy, the Vatican being one of only 14 countries which still have diplomatic ties with Chinese-claimed Taiwan.

An epidemiologist by training, he was Taiwan’s health minister during the 2003 SARS outbreak, credited with bringing the disease under control, and played an important role in shaping Taiwan’s response to COVID-19.

Twitter says it is not planning big layoffs By Reuters

US Baby Formula Crisis Could See Some Relief As FDA, Abbott Agree On Deal By Benzinga