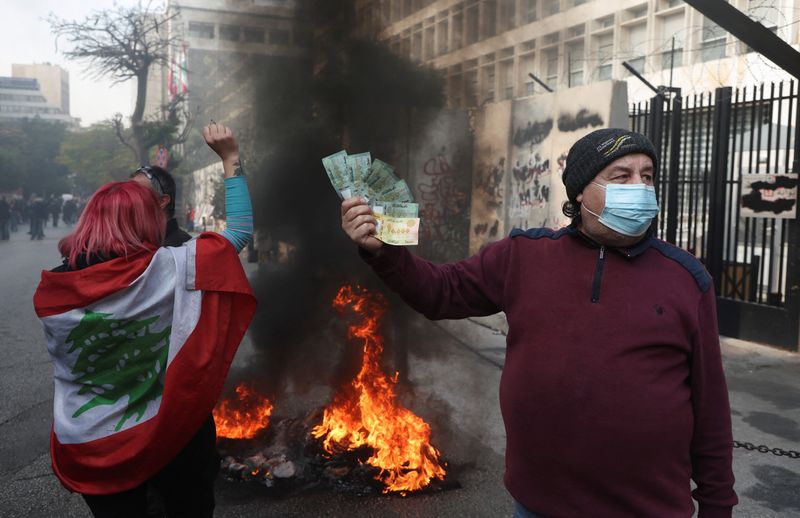 BEIRUT (Reuters) – Protesters burned tyres and held up handfuls of local currency bills on Wednesday at the entrance of the Lebanese central bank in Beirut, furious over the spiralling devaluation of the lira.

Lebanon’s economic meltdown, which began in 2019, has cost the lira around 97% of its value. The decline has been particularly steep in January, dropping from 42,000 Lebanese lira per dollar to a new low of 56,000 this week.

That has prompted demonstrations and short-lived street closures in Beirut this week, and a few dozen protesters gathering outside the Central Bank on Wednesday.

“I used to use this 16,000 Lebanese lira to buy a kilo of meat for me and my kids. Now 250 grams costs 100,000. Our kids are hungry, we’re hungry,” said Abu Ali, an older man from Lebanon’s south who was clutching a handful of Lebanese notes.

Another man ripped up a dollar as protesters threw rocks at the Central Bank.

Since the crisis began, Lebanese banks have severely restricted withdrawals of dollars and lira, also known as Lebanese pounds – measures that were never formalised by law but have become governed by circulars issued by the Lebanese Central Bank.

“Maybe the central bank governor will feel some empathy and stop these ignorant circulars at the expense of the depositors – which are masked haircuts and at the same time systemic theft of depositors’ funds,” said Saeed Suweihi, a member of advocacy group Depositors’ Outcry, which organised the protest.

Petrol prices also jumped on Wednesday to more than a million Lebanese pounds for a 20-litre tank, unaffordable for many of those earning in local currency.

Lebanese central bank governor Riad Salameh in November said the official exchange rate, which has remained unchanged at 1,507 pounds despite becoming all-but obsolete – would change on Feb. 1 to 15,000 – the first official revaluation in 25 years.

Dollar Up, Boosted Back Above Support Levels as U.S. Yields Climb By Investing.com